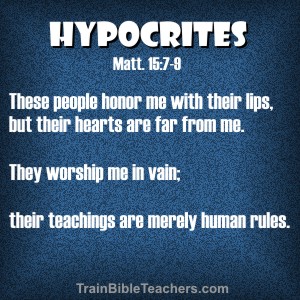 Though Jesus spoke of the religious leaders and teachers when He lived here on earth, Bible teachers today would do well to heed His words.

You hypocrites! Isaiah was right when he prophesied about you: “These people honor me with their lips, but their hearts are far from me. They worship me in vain; their teachings are merely human rules.” (Matt. 15:7-9)

Just as it did then, hypocrisy still affects not only one’s own life but also those they teach. Understanding that hypocrisy isn’t new doesn’t excuse us today but rather should make use more vigilant and accountable.

Hypocrisy Then and Now

Hypocrisy existed in Jesus’ day but also obviously long before that. Jesus quoted prophetic words also applied to people of Isaiah’s day as can be read in the context of the verse Jesus quoted (Isaiah 29:13). This chapter in Isaiah described Jerusalem, the city of David, known as Ariel, meaning the lion of God (Isa. 29:1), as spiritually blind, lethargic, and lacking authenticity. God confronted their hypocrisy saying, “Woe to you” (29:1, 15).

Centuries later Jesus addressed the hypocrisy found in the Pharisees and teachers of the law of His day. Read through the Gospels and you’ll find Jesus repeatedly calling out the religious leaders and teachers of His day for their hypocrisy. Matthew 15 gives us just one of many examples.

Are Bible teachers today any different? Perhaps we don’t do exactly what the teachers of the law did then, but we still find inconsistencies between what we say and what we do. We still find ourselves sometimes telling our students to do one thing while not doing it ourselves. Our pride can still keep us from admitting our struggles. We still find ourselves trying to take the speck out of someone’s eye while paying no attention to the plank in our own eye (Matt. 7:3-5).

Why It Helps to Know that Hypocrisy Isn’t New

Since hypocrisy has been a human struggle through the ages, we shouldn’t presume that we would be the exemption. We too can easily fall prey. Pride can keep us from admitting our own susceptibility to this human condition. And, that same pride leads us into it (Prov. 16:18). While not all Christians should be pegged as hypocrites, we do all have the potential. — We need awareness and vigilance against it.

Since God’s reaction to hypocrisy didn’t change from the days of Isaiah to the time of Jesus, we should assume that God’s assessment and reaction to it today would be the same. And, the effects of hypocrisy remain the same as seen in how many people still identify hypocrisy as a reason for not becoming a Christian. Though people need to be looking at our perfect Savior, their tendency is to look at His imperfect followers and draw conclusions from that. Hypocritical church leaders and teachers can stunt the health and growth of those they serve. Certainly God would still say, “Woe to you!” — We need accountability and victory over it.